In the summer of 1996 I found that horseman's paradise had a name: Mongolia. 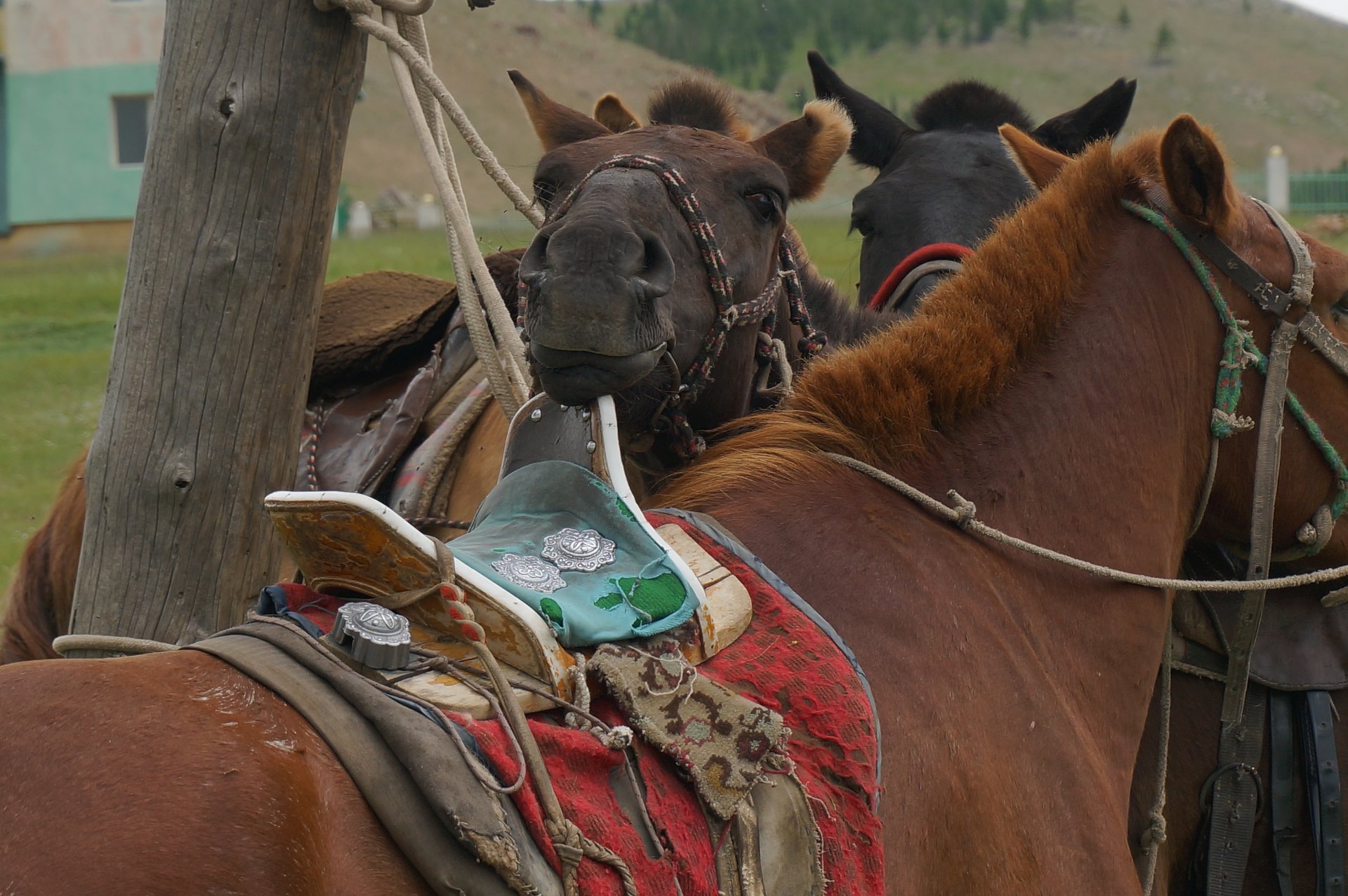 Start with a big sky, add abundant grassland, mountains, and rolling hills; lakes and rivers with crystal clean, drinkable water; disperse free-roaming herds of horses, camels, and sheep according to taste. Finally, add the heady aroma of mutton fat to round it all out. One word of caution, however, you must not add any roads or fences. This would indeed spoil the horseman's recipe for the ideal horse country. As an avid rider and endurance competitor over the last 10 years, I have often dreamed of just such a horseman's paradise. In the summer of 1996, I found that paradise had a name: Mongolia.

As a young boy, I had read the adventures of Svend Hedin the explorer and all my life dreamt of Mongolia. Now I was one of 13 equally eager riders from Japan, New Zealand, Brazil, Europe, and North America. We were under the wing of Linda Svendsen, owner, and founder of Boojum Expeditions. Linda pioneered riding adventures in central Asia, breaking new ground in tourism and diplomacy with the first riding vacations in Tibet, Inner Mongolia, Manchuria and the Kazakh regions of China. We arrived in Mongolia's capital, Ulaan Baatar for the Naadam festival, where Mongolian culture is celebrated through the "manly" sports of archery, wrestling and horse racing. As an avid competitor in ski archery, (the equivalent of biathlon, without firearms) I had a particular interest in the archers, who shoot at 70-meter targets with their handmade horn and wood bows. Genghis Khan's armies conquered the largest land empire in history with two things central to Mongolian life; the horse and the bow.

The horse races are the highlight. As many as a thousand horses mass at the start for a 30-kilometer race. The jockeys are boys and girls, four to seven years old. During the race, many kick off their boots and drop their saddles to give their mount every advantage.

As the first riders approached the finish line, the crowd, many of them mounted, took up the ululation of the young riders as they urged their ponies to the finish. I guarantee that no horse person, on viewing this spectacle, would be unmoved! They teach the horse not to stop during the race, no matter what may happen. In the race, I observed, dozens of riderless horses ran on to the finish, their riders collected by the support jeeps. The winning horse is "Tumay ekh" or "Winner of ten thousand". The last horse also receives a prize; a song sung, not to humble him, but to encourage him for next year's race. 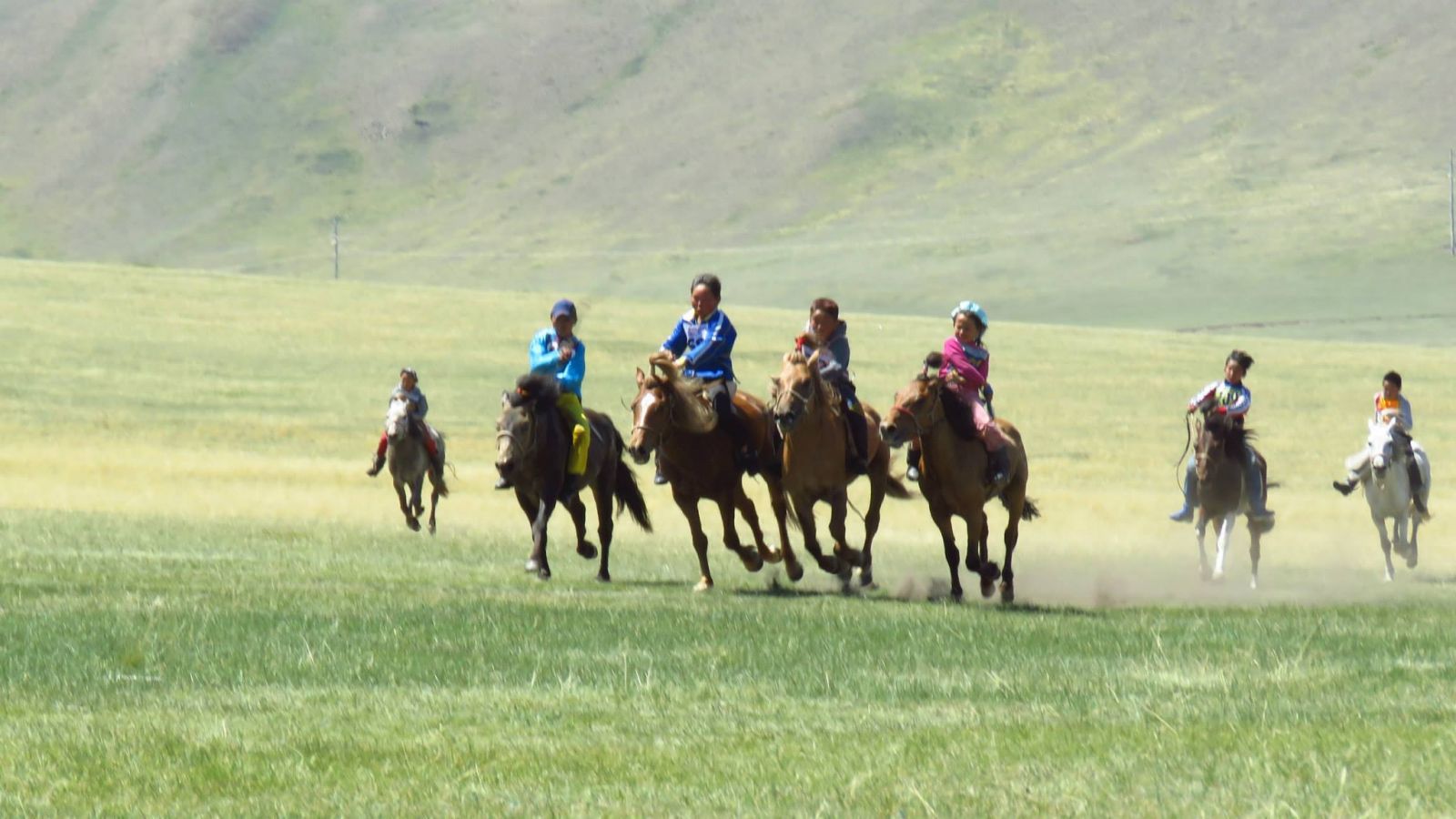 The Darhat Valley in the most northern part of Mongolia was our destination. Our objective: To ride through the Darhat Valley and search for the summer camp of the "Tsaatan" or "reindeer people". The Tsaatan summer near the Siberian border where their nomadic life is based on reindeer. Along the way, we passed through some of Mongolia's most spectacular and diverse scenery and experienced the renowned hospitality of the nomadic herders. By airplane and truck, we traveled for nearly three days, until the confluence of the Tengis and Shishgid rivers stopped further motorized travel.

At this bucolic location, Boojum Expeditions had built a rustic lodge. It was mid-August and the river waters were just warm enough for an extended swim. The fishing enthusiasts among our group had a heyday catching lenok and grayling. The next morning we got acquainted with our mounts. Annette, one of the most experienced riders, took off at a gallop just seconds after swinging into the saddle. Some raised eyebrows followed her, but Baigalun, one of the wranglers, pointed out that this particular horse was a winner last year at Naadam. We all reflected on the training these horses receive; to keep going regardless...

In Mongolia, everyone rides. Travel on horseback is a way of life, perfected over thousands of years. The horses are pony sized but their appearance belies their character. They are spirited, tough animals, able and willing to carry their riders at a healthy clip all day long, for days in a row, with neither horseshoes or grain. Their preferred gait is a fast trot that lacks any leg extension, but displays a dizzying high cadence and covers ground rapidly. Horses make pastoral nomadism possible. From the back of a horse, the nomad has both economic and political freedom. It's hard to tax and govern people who can simply gather their goods and be gone! So the Mongols learn how to ride before they can walk, and on the backs of their horses, they are always smiling. The indigenous saddles are made out of wood and were definitely an acquired taste. We chose the Russian Cavalry saddle instead, a distant relative to our English saddles. A prominent feature is a "horn" of metal tubing and "cantle" of the same. Convenient for tying necessities on but less appealing if one happens to lose fore and aft balance while posting!

Along with our horses, we met our local crew; Ariunna, head guide, Gana , cook, Oyuna, interpreter, and five wranglers who would handle the pack horses. We set off through a wilderness abounding in larkspurs, edelweiss, and bluebells; bizarre rock formations with waterfalls and steep, high mountains creating an image of fairyland travel. After covering about 14 miles, we stopped to set up camp at the riverside. We unsaddled our horses, set up the tents and build fires. Before long, Gana presented us with the first of a series of delicious variations on mutton stew. 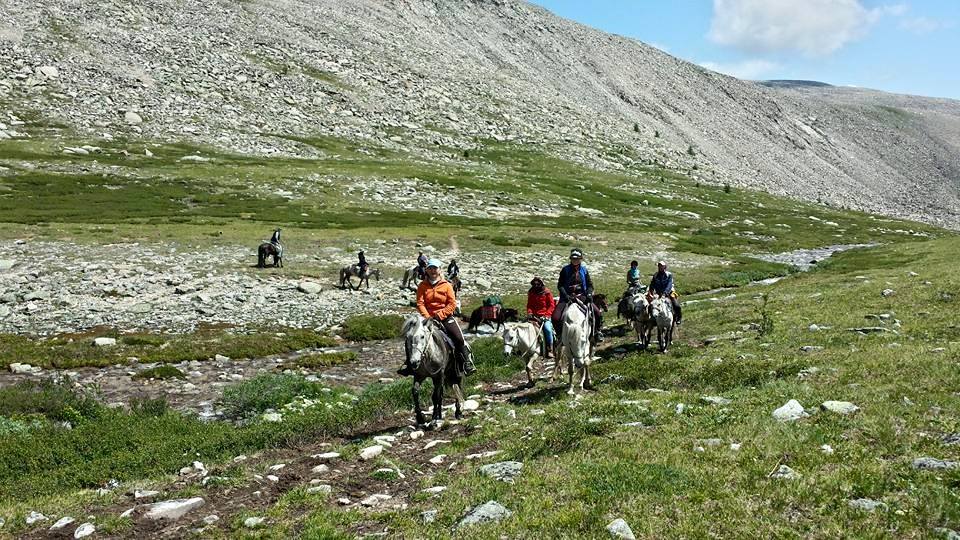 The next morning, the forests became more dense with moss-laden larch trees and thick dark green underbrush. Deep taiga moss, sometimes horse-belly deep, and bogs slowed our travel to a walk. Then, late on our second day, we spotted small white spots against the tundra. It was the tipi-like tents of the Tsaatan! We all scouted intensely for the reindeer, but they were still browsing in the distant hills. Only at dusk, after we have camped nearby, did they appear across the tundra and gather around the tipis. The cows were milked, the bulls tethered for the night or saddled to stand ready as mounts. Many of us enjoyed the offer to ride a reindeer. Smooth-gaited, reindeer is a lot of fun to ride. Their hooves are very pliable and spreading laterally making them surer-footed on tundra than the horses.

The 3000 remaining Tsaatan are not members of the Mongol race. They are smaller in stature and have distinctly different facial features. They also have their own language, related to Turkish. But, Mongols and Tsaatan have much in common. They are both proud people, and their hospitality is boundless. We are invited to share tea, "airag" (fermented milk ), yogurt and reindeer cheese. Like the Mongolian gers, their tents have the hearth in the middle representing the center of the family as well as symbolizing ties with their ancestors. Etiquette requires always entering and proceeding clockwise around the hearth. Mongolia is full of traditions and customs and Linda had briefed us thoroughly prior to our arrival to avoid any major faux pas. "Don't be a culture klutz" she admonished us. 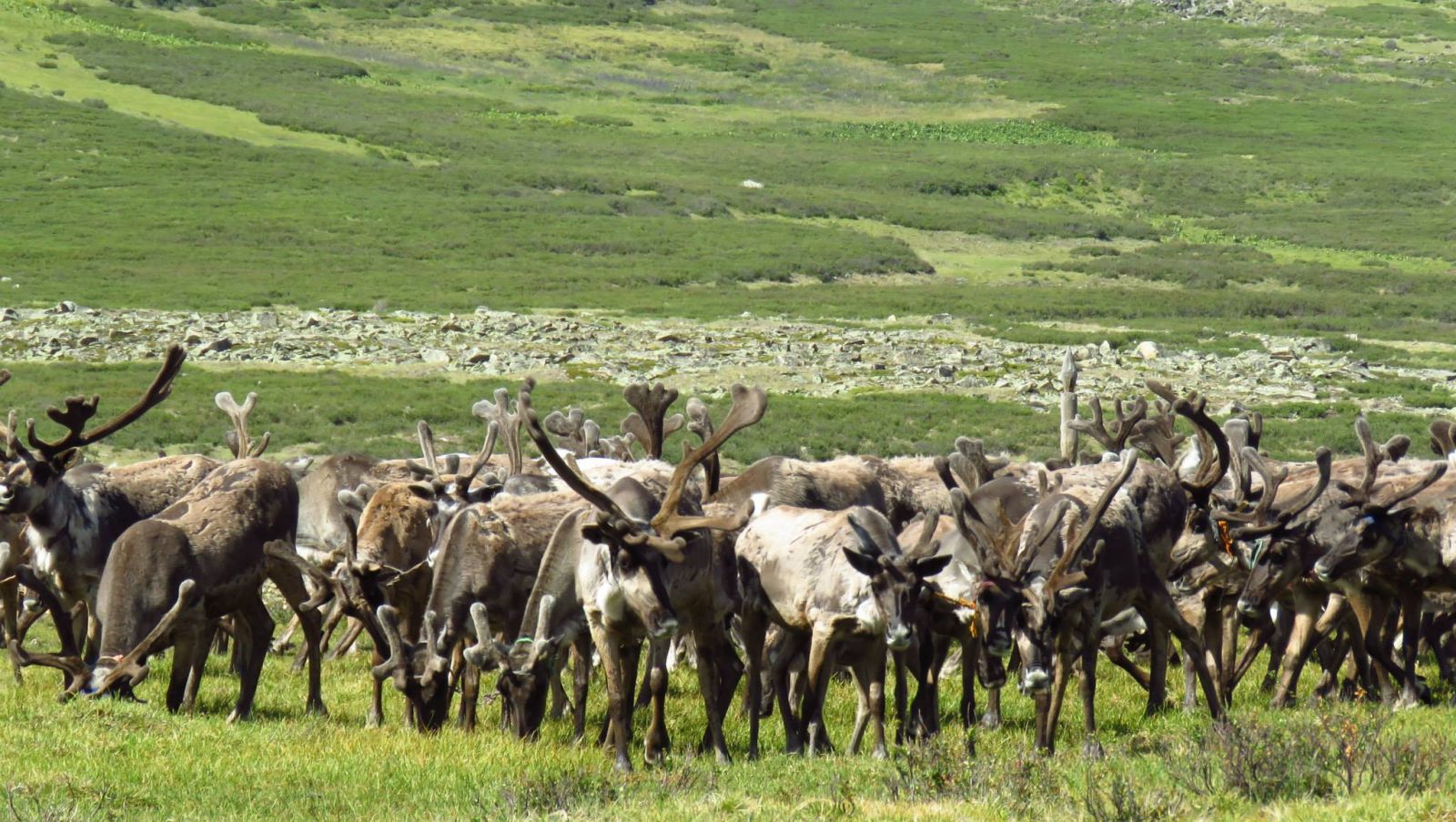 Our return to the lodge went smoothly with great weather and plenty of opportunities to canter along the trails beside the Tengis River. We then set out cross country for the hamlet of Bom, where our faithful Russian truck would pick us up for the return journey to Ulaan Baatar. Along the way, we crossed the Shisgid River, loading people and gear into a rickety rowboat and then swimming the horses across. The remaining riding days were spectacular with a mixture of forest and valleys for loping and trotting. We were often joined by local riders, who, seeing this strange foreign entourage, dropped their herding duties for a while and rode with us in friendly and appreciative curiosity.

Flying back to Ulaan Baatar, we all reflected on the beauty of the country and warmth of the people. Yet we had seen some disturbing signs of the invasion of modern life. From the air, you can see multiple roads braided across the landscape and erosion of the grasslands beginning. We, the visitors, who have the privilege to experience this genuinely unspoiled part of our planet, had great memories but were left to ponder how Mongolia can avoid the mistakes that "modern" cultures have made in pursuit of "progress".